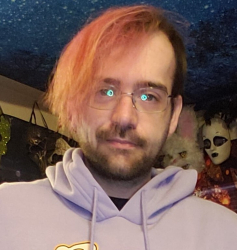 Daniel Meierer
Daniel Meierer got a taste of Vr back in 2020 and has been rabidly obsessed ever since. He has been experimenting and trying out every genre he can put his hands on. Determined to get the most out of his headset and the PC he has it linked to, he has experienced Vr titles you have heard about and ones you never even dreamed of. Some of his favorite experiences include blasting baddies with explosive arrows in Walking Dead: Saints and Sinners, building bases in Vivecraft, and learning of a lightsaber with a built-in blaster existing in the Blade and Sorcery mods.

Superhot is a staple in indie gaming. So it was a pleasant surprise to everyone to find out Superhot VR was going to be one of the first games to prove just what VR can do. But, of course, it doesn’t hurt that that ‘time moves when you move’ mechanic lends itself beautifully to Virtual Reality.

In Super Hot, you are a specially trained agent. Hilariously, you use a VR helmet to control an ‘avatar’ in this story’s natural world. You can take out hits from an unknown organization whose only true goal is to destroy ‘The Pyramid.’ This avatar is what protects you from death and liability.

Time will only progress when your hands or head is moving. Otherwise, everything will be ghostly still, allowing you to fine-tune your aim or take a moment to access the situation. Sometimes you need a little more guidance than just a few extra seconds.

This is why I’m here to push you straight to the pyramid and the endlessly addictive modes only available once you beat the story.

The most extensive advice for defense is to remember the key mechanic. Time only moves when you move. Use this to plan accordingly and keep your head in the game.

Bullets will move slowly, and, even before that, you will have time to look down the chamber of the enemy’s gun. Simply put, an item between you and that bullet. An object will shatter immediately, while any weapon will be invincible to bullets.

All three of these techniques are related to each other. Duck and dodge to avoid hits based on where the bullet is coming from. If the enemy isn’t close enough to you, perform a ‘windmill Dodge’ where you move your upper body like a windmill while crouching.

All the levels will include some manner of cover. This cover may be faulty, and the enemy might flank you, but it is better than being naked in the breeze.

If an enemy is close enough, you can reach out and pluck the weapon from their hand. This momentarily disorients them, but they will quickly snap out of it and rush you unarmed.

The best defense is an endless offense.

I am afraid there is no range to practice on until you reach the endless modes. All you need to know for open-sight aiming is to Take the U, put the I in the middle, and make a W. All guns only have a set amount of ammunition before they run out. For you. Enemies have unlimited bullets.

The pistol will shoot one bullet at a time. The uzi will fire three to four shots which you can spread by moving the gun as you hold the trigger. The shotgun is capable of two cone-shaped sprays.

Throwing weapons is never advised if there is an object near. Empty guns can be used for deflection if a full one isn’t available, so they should be thrown as a last resort. Regardless of the item, it will kill the enemy instantly upon impact. Objects will be destroyed if hit by an oncoming bullet in mid-air. On the other hand, weapons will deflect a shot and keep flying without changing its momentum.

Press the grip and trigger to make a fist. Send it flying for anything red. Be careful not to be hit by the enemy’s fists before you hit them with yours.

Starting from level 12: <REDACTED>, you will gain the ability to physically blow up enemies’ heads. This power takes a moment to recharge. Unfortunately, it also takes a moment to activate, so plan accordingly.

Head-Explosions are done by holding both hands out to your intended enemy and holding both the trigger and grip simultaneously.

An easy level to show off the mechanics, use the gun you are given to take out the enemy in front of you. Easy-peasy.

Another level to teach you the mechanics. Follow the Path of Neo and start windmill dodging. Once the enemy gets close enough, steal his weapon and finish him.

How good are you at throwing ninja stars? Well, too bad. Your weapons are ninja stars. Luckily, none of these enemies are armed. This will give you a chance to practice your throw. You will want to aim slightly higher than you might be expecting, but don’t fret if you miss. They will just get close enough for you to unleash your kung-fu on their faces.

Question: How do you Unlock Endless Mode, Hard Core, Don’t Die, Speedruns, and Headshot Only in SuperHot VR?

Answer: These extra modes are only unlocked after beating the story mode’s 19 levels. You can access them using the mode floppy disks that will appear in front of your computer after completion.

Question: Is Superhot VR the Same Game as Superhot?

Answer: No, Superhot VR might share the world and mechanics of the original flatscreen counter-parts, but Superhot Vr was made exclusively for virtual reality.

You did it, agent. You destroyed the pyramid, you unlocked the extra floppy disks, and you took on the endless shimmering red goons. You truly are the most super hot of any of the agents out there. Mostly because you killed all of them. Don’t fret though, there is plenty more fun and difficulty to be found in the new floppy disks that have been laid before you.

These will just double down on the difficulty in one way or another. Though that disk with endless written on it repeatedly looks like it might just have some replay value left in it.

Until you want to throw that old headset on again, have a marvelous one.