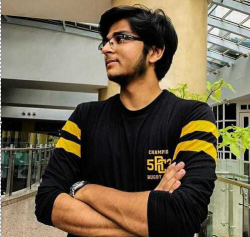 Ali Mustafa
Ali is a VR enthusiast that firmly believes that VR is the future. He has enjoyed exploring his favorite games with new VR support, and equally, he has loved playing VR specific titles that have pushed the medium forward. His favorite of these being the incredible Half Life: Alyx. When not strapped to a VR Headset, Ali also loves playing GTA, or grinding away to help his team in a MOBA title!

When talking about the best games for VR; Blade and Sorcery top the list.

I remember deciding to get my first VR when I saw Blade and Sorcery’s gameplay trailer on YouTube. Being a Skyrim fan, I was naturally attracted to Blade and Sorcery’s fighting style. The thought of combating enemies with cool swords and magic spells intrigued me.

It is an amazing addition to the Oculus library and a game you should add to your cart if you have a knack for medieval sword fighting and magic.

Simply download the game from the Quest store on your Oculus Quest 2 headset and enjoy the PC VR experience on your standalone headset!

Blade and Sorcery: Nomad is a masterpiece. It easily makes it to my top 3 favorite standalone VR games for the Quest 2 (the other two being The Walking Dead Saints and Sinners and Superhot VR).

The creator of Blades and Sorcery is a small indie company that goes by the name of ‘WarpFrog.’ That being said, it is extremely impressive how they have managed to port this amazing game as a standalone for the Quest 2 – keeping all of the elements of the original game intact.

The PC VR version of Blade and Sorcery is a massive hit in the VR gaming world. Many people (including myself) were convinced to get a VR after being impressed by games like Blade and Sorcery. As the Quest 2 lacks the hardware power of a standard gaming PC, Blade and Sorcery: Nomad has evident degrades in graphics and stutters when there’s a large NPC count in a single frame.

Thanks to the mod support, Blade and Sorcery: Nomad is receiving an extremely positive reception from players around the world. I believe that if you enjoyed Blade and Sorcery on PC, you would love it on the Quest 2. Or, if you haven’t been able to try the original Blade and Sorcery because you didn’t have a gaming PC, now is the best time to experience one of the best VR games of all time!

Blade and Sorcery: Nomad does justice to the original PC VR game, which we fell in love with. All of the elements of the original game have been transferred to the standalone version with no compromises on the physics-driven sandbox gameplay and the smooth movements. It is an amazing port, and while you might notice some bugs and jitters here and there, I guess you would expect that in a game that is still in early access.

The developers mentioned that the game hasn’t yet been patched to completion, and it might take them some time to make the game picture-perfect. Considering that the original PC VR game is still in early access, years after it was released, I believe that it won’t be long before the developers will finalize the game and update the patches, which will make the game even better than it already is.

Now that we’ve provided an honest overview of the medieval fantasy simulation sandbox game that is beloved in the VR community, even though the game hasn’t been fully released, let’s do a deep analysis of Blade and Sorcery: Nomad.

As one can assume, porting a PC VR game to Quest 2 as a standalone might have required some graphical compromise. It would be foolish to think that the standalone version could outperform the PC VR version of the game, especially in terms of graphics. The developers have implemented a heavy use of FFR (fixed foveated rendering) in Blade & Sorcery: Nomad.

You can notice reduced blood splatter and reduced vegetation in the game (nothing a few mods can’t fix *laughs in PC Masterrace*) overall, you might notice a bit of a cartoonish and a bright environment in the Quest 2 version of the game, while the PC VR version of Blade and Sorcery was a bit dark and gloomy.

I did notice, however, some stuttering in large environments and when there are a lot of NPCs in an area, but I guess we can overlook this bug considering the game is still early access. Surprisingly, the graphics degradation is not that noticeable if you don’t compare it side-by-side with the PC VR version, and the game was never about life-like graphics anyways.

The main reason why Blade and Sorcery was a hit was because of the out-of-this-world gameplay, and that gameplay has passed as is! Let’s check out the gameplay factor of Blade & Sorcery: Nomad.

If you loved Blade & Sorcery on PC VR like me, you are going to LOVE Blade & Sorcery: Nomad. WarpFrog didn’t compromise a bit in changing the gameplay in any way which makes it pretty hard to differentiate between the standalone and PC VR version of the game in terms of gameplay.

Blade & Sorcery: Nomad returns the amazing physics-driven sandbox design of the game we all loved and spent hours on! You won’t notice a difference in gameplay from the PC VR version – which means you can still perform comedically gruesome hack and slash. You can still decapitate enemies, dismember and toss people to chaotic deaths.

When you start the game, you’ll find yourself in your safe house, where you can play around with magic and your weapons, select places to travel, and the mode you want to play. Go to the training area in your safehouse and try out all of the weapons you have in your arsenal to find out the best weapon for you! Every medieval weapon you can imagine is nestled away in the corner of your safe house, which also has numerous objects to interact with and have a lot of fun with before the actual game even begins!

You can go crazy with the weapons, do target practice or just mess around with objects around the safehouse to experiment with the amazing in-game physics. There are two modes – Survival and Sandbox to choose from, in the map area of the safehouse.

The main aspect that made PC gamers consider themselves superior to console gamers is the ability to mod their games. Mods give games a whole new outlook – you are given the freedom to customize the in-game world as assets as you wish.

Mods are what made games like Skyrim, Fallout, GTA, etc., so successful. As far as VR games go, mods in Blade and Sorcery and Bone works are extremely popular on PC VR.

Mods provide additional features, magic spells, and, most importantly, unique weapons! I remember modding Chains of Olympus in my Blade and Sorcery: Nomad on the Quest 2. Take a look:

That’s the beauty of this game and mods! I felt like Kratos by modding these blades in the game, and it immensely improved the overall feel of the game for me. Similarly, you can take a look at different mods for Blade and Sorcery: Nomad, install them and enhance your Blade and Sorcery experience!

Where To Buy It?

Blade and Sorcery: Nomad is available to buy on the Quest store for Quest 2 users for a whopping price of $19.99.

The game is in Early-Access and receives updates quite frequently, with bug fixes and improvements. Is Blade and Sorcery on the Quest 2 worth buying? Let’s take a look at the difference between the standalone version and the PC version of Blade and Sorcery.

Blade and Sorcery were first released on PC VR by ‘WarpFrog.’ It was only recently that Blade and Sorcery were announced for Quest 2 as a standalone version in Connect 2021. WarpFrog is not a game developing giant as compared to other studios, so the game is still in the ‘Early-Access’ stage.

Blade & Sorcery: Nomad is almost similar to the PC version when it comes to gameplay. This is extremely impressive, considering WarpFrog is not a large game developing company. Porting this amazing game from PC to standalone VR must have been a daunting task as their main PC version of Blade and Sorcery is still in early access.

When you start the game, you’ll immediately sense the familiarity of the setting, the physics engine, and the free flow fighting that made the PC version a hit. You’ll be able to train with whatever weapon or spell you choose in your safe house, and you’ll be free to determine where your next journey will take you.

When the game launches, you’ll have access to 5 distinct locations (as compared to 6 maps included in the PC VR version of the game). The makers have promised that they’ll keep adding new ones alongside the PC version — but not at the same time since the two games are so vastly different in terms of technical specifications.

Here is a chart highlighting the differences and the similarities between Blade and Sorcery as standalone on Quest 2 and as a PC VR game:

You can notice the evident graphical difference when both versions are compared side-to-side. However, this difference is not noticeable when you’re playing the game.

Question: Do You Need a Gaming PC to Play Blade and Sorcery?

Question: Is Blade and Sorcery on Oculus Quest 2 Multiplayer?

Answer: Blade and Sorcery: Nomad and Blade and Sorcery PC VR both don’t support multiplayer. There is hope that WarpFrog might introduce a multiplayer mode sometime in the future since the game is still in early access and the developer promised many updates and features until the final release.

Question: Is Blade and Sorcery Free?

Blade and Sorcery: Nomad is an amazing port of the original PC Blade and Sorcery game for VR. Thanks to WarpFrog, you can enjoy this amazing game on your Quest 2 without needing a gaming computer to play the game.

Blade and Sorcery: Nomad has hours and hours of fun gameplay to offer players, and the mod support is a cherry on top of the already amazing game. The game dynamics are very enjoyable, and it is no doubt one of the best Quest 2 games of all time!

I hope you found this post enjoyable to read; So, what are you waiting for? Download Blades and Sorcery: Nomad today on your Quest 2; pick up your sword, and it’s time to dismember some bandits! Happy dueling!

What is Oculus Link?

Is BONEWORKS on Oculus Quest 2?